Heroes of WWII: The Ghost Army of WWII

Have you heard of the tactical deceptions carried out by the 23rd Special Troops during WWII?

Also known as the Ghost Army, the 23rd Special Troops were activated on January 20th 1944. Their mission? Deception. Comprised of artists, fashion designers, architects, sound engineers and actors the troops were encouraged to use their creative thinking to create acts of deception.

One of their main operations was Operation Quicksilver, a component of the strategic Operation Bodyguard plan. The goal of Operation Quicksilver was to deceive the German's into thinking that the Allies were going to invade in the Pas De Calais region rather than the planned destination of Normandy. To do this the Ghost Army got to work fabricating false radio transmissions explaining the movement of units from their true locations to south-east England, feeding double agents incorrect intelligence and creating displays of dummy hardware (including inflatable tanks!). This mission was incredibly successful and no-doubt bolstered the success of Operation Overlord.

Troops were sent to Normandy two weeks after D-Day, where they simulated a Mulberry harbour (a temporary floating harbour) at night with lights intended to draw German artillery from the real ones. After this the entire unit assisted in tying up the German defenders of Brest by simulating a larger force than was actually encircling them. 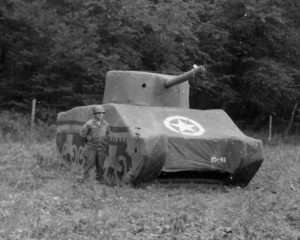 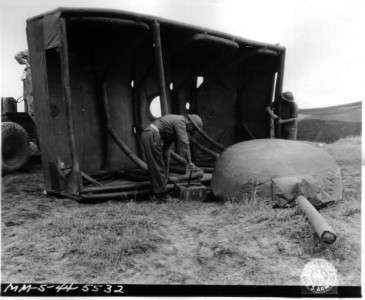 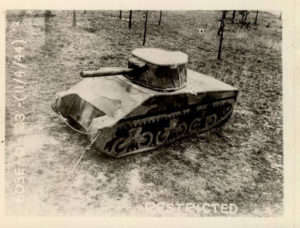 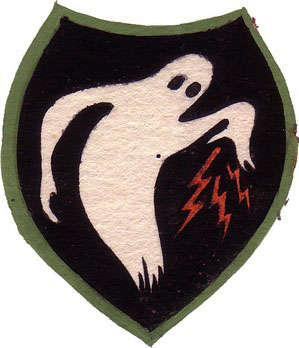 There were four arms of the 23rd Special Troops, each had their own specialist techniques:

Visual deception: The visual deception arm of the Ghost Army was the 603rd Camouflage Engineers. It was equipped with inflatable tanks, cannons, jeeps, trucks, and airplanes that the men would inflate with air compressors, and then camouflage imperfectly so that enemy aerial reconnaissance could see them. They could create dummy airfields, troop bivouacs (complete with fake laundry hanging on clotheslines), motor pools, artillery batteries, and tank formations in a few hours.

Many of the men in this unit were artists, recruited from New York and Philadelphia art schools. Their unit became an incubator for young artists who sketched and painted their way through Europe. Several of these soldier-artists went on to have a major impact on art in the postwar US. Bill Blass, Ellsworth Kelly, wildlife artist Arthur Singer, and Art Kane were among the many artists who served in the 603rd.

Sonic deception: The 3132 Signal Service Company Special handled sonic deception. The unit coalesced under the direction of Colonel Hilton Railey, a colourful figure who, before the war, had "discovered" Amelia Earhart and set her on the road to fame.

Aided by engineers from Bell Labs, a team from the 3132 went to Fort Knox to record sounds of armoured and infantry units onto a series of sound effects records that they brought to Europe. For each deception, sounds could be "mixed" to match the scenario they wanted the enemy to believe. This programme was recorded on state-of-the-art wire recorders (the predecessor to the tape recorder), and then played back with powerful amplifiers and speakers mounted on halftracks. These sounds were audible 15 miles (24 km) away.

Radio deception: "Spoof radio", as it was called, was handled by the Signal Company. Special Operators created phony traffic nets, impersonating the radio operators from real units. Different Morse Code operators each have their own individual style of sending; the Signal Company operators mimicked a departed operator's style so that the enemy would not detect that the real unit and its radio operator were long gone.

Atmosphere: To complement existing techniques, the unit often employed theatrical effects to supplement the other deceptions. Collectively called "atmosphere", these included simulating actual units deployed elsewhere by the application of their divisional insignia, painting appropriate unit insignia on vehicles and having the individual companies deployed as if they were regimental headquarters units. The same few covered trucks or lorries, with just two troops in the visible seats near the rear to appear to be full of motorized infantry, would be driven in a loop to look like long convoys. "MPs" (military police) would be deployed at crossroads wearing appropriate divisional insignia and some personnel would dress as divisional generals and staff officers visiting towns where enemy agents or scouts were likely to see them. A few actual tanks and artillery pieces were occasionally assigned to the unit to make the "dummies" in the distance appear more realistic.

Overall, the Ghost army was active from January 1944 - June 1945 and had worked with four U.S. armies through England, France, Luxembourg, Belgium, Holland and Germany. The story was kept secret for more than 40 years after the war, until it was declassified in 1996.