Heroes of WWII: The Churchill Club

Have you heard of the Churchill Club?

Founded by Knud Pedersen during the German occupation of Denmark at the end of 1941, the club consisted of 8 teenage boys, aged between 13 and 17, who all attended the Aalborg Cathedral School in the north of Jutland.

After their family relocated to north of Jutland, Pedersen attended the Aalborg Cathedral School where he met Mogens Fjellerup, Eigil Astrup Frederiksen, Helge Milo, Uffe Darket, Mogens Thomsen and Børge Ollendorf who were all unhappy with the way Denmark had peacefully submitted to the Nazi forces.

Under the guise of playing bridge, the boys planned their acts of sabotage and vandalism. Realising the city was heavily patrolled by the Nazis at night, most of the hits they planned took place in broad daylight. Starting with defacing sign posts put up by the occupying forces, the club then moved onto slashing the tyres of Nazi vehicles and stealing firearms. Stashing the weapons in the basement, the Pedersen brother's parents had no idea what they were up to.

In total the Churchill Club committed 25 acts of sabotage, including blowing up a railway wagon carrying supplies to Nazi forces. On May 8th 1942, the cache of Nazi weapons the boys were storing was discovered and they were all arrested at school, they were sentenced to 18 months to 3 years in prison for the offenses of serious acts of sabotage against German armed forces, theft of weapons and ammunition, vandalism, and arson. 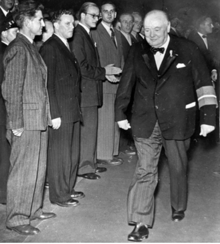 The Churchill Club in 1950 meeting Winston Churchill
Being imprisoned did not stop these brave boys from their vandalism and general mischief making, for 19 nights in a row three of the boys escaped from a gap they had made in the bars of their cell window. They carried out more acts of sabotage on these nighttime adventures. However one evening after escaping their cell instead of finding themselves covered in moonlight they had broken out while it was still light outside. To get out of view they quickly entered a movie theatre only to find that they were seated among German soldiers enjoying a weekly newsreel of German battlefield heroics.

Their escapades were soon discovered by the prison wardens and they were all transported to the Nyborg State Prison. Here most of the Churchill Club remained until the end of the war. These brave teenagers are regarded as the group that started the resistance movement in Denmark, so when Knud Pedersen was released on May 27, 1944 he then assisted resistance members until the end of the war.

After the war in 1950, Winston Churchill was in Copenhagen to accept an award for outstanding contributions to European culture and was determined to meet the members of the resistance club that was formed in his name. Knud Pedersen showed up to the event with a small business card in hand which stated his name and title 'Member of the Churchill Club'.